It sounds quite old but seems like only yesterday, we peeked inside a cardboard box to see the cutest bundle of black and white fur looking back at us.

Right from the beginning, Merlin has known exactly what he wanted and the best way of getting it.

We called him Merlin for his arrival was completely unexpected, and seems to have magical powers sometimes, and the longest white whiskers.

He would never use a litter tray, even as a small kitten. He insisted on exploring the garden, and that was that. We lived in a caravan at that time, and he was in his element, enjoying the fields that surrounded us. He would make these round nests in the long grass, and God knows what the sheep made of him.

He is such a good cat, but he has one habit. Although it is rather sweet, we wish he didn’t. He likes to bring us gifts, frogs, mice, and once a butterfly. Not unusual, I hear you say, but all of these things were unharmed. The butterfly actually flew away, once he opened his mouth. He is not very good at catching things though, leaving us to evict the majority of his presents.

Then one day, he didn’t come home. We worried and hunted for him, and thought he would turn up eventually. Only he didn’t.

The weeks went by, and nothing happened. The weather grew colder, and it broke our hearts to think of him out there, cold and alone. We travelled all over Petersfield trying to find him, but no one had seen him.

Then, months later, we had a call from our local vet, wondering if the cat that had just been brought in could be Merlin. It was, but a very different Merlin from the one we remembered. He was thin and nervous, and although he seemed to remember us, we could tell he had been through a lot since the last time we saw him.

It was a long time before he regained some of his adventurous spirits, but even now, we worry every time he goes out. Especially now his is such an old man. He can’t jump as well as before and his muscles are stiff, but he is as beautiful as ever… 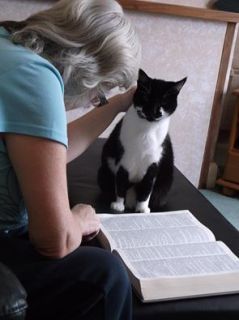