Not sure what I was looking for, but during my browsing the other day, I came across an article about a clockwork lion. The picture intrigued me, being a lifelong visitor of the lions in Trafalgar Square in London.

When I was a small child, I remember visiting Trafalgar Square a lot. It seemed like a magical place to me, what with the water fountains, thousands of pigeons and those enormous black lion statues.

So when I saw this article, I knew I had to know more about it.

“The four bronze lions of London’s central Trafalgar Square got a temporary addition on 28 January, with a clockwork sculpture of the animal unveiled to highlight the plight of big cats. The statue, made of clockwork mechanics, will stand in the square for just a day before being auctioned off to raise money for National Geographic’s Big Cats Initiative, which says it aims to halt the decline of big cats in the wild.”

Time is beginning to run out for all of the big cats, and to put it into perspective, there are apparently more statues of lions in London than still roaming in the wild. 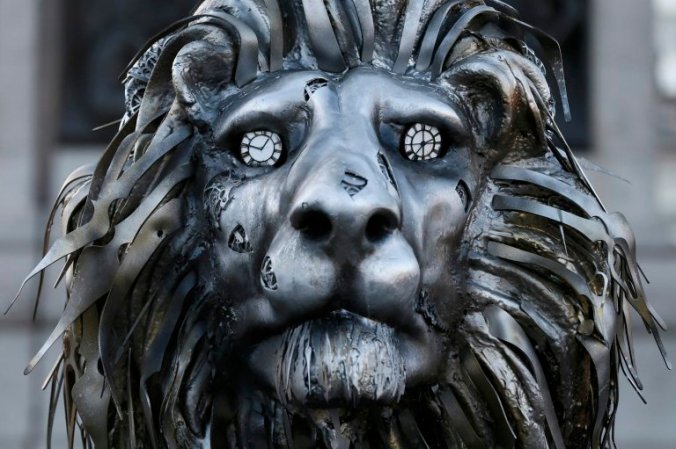 The clockwork lion was designed by Sculptor Iain Prendergast, to deliver a poignant message about the plight of the big cats.  “On the body, mainly as if it was the inner workings of a clock, so it was cogs, levers and coils and all sorts of things like that,” he said at his workshop. “And then up to, obviously the eyes, we’ve got clocks in them, clock faces but yeah, it’s just looking at each little part of the clock, obviously the hands for the mane, just seeing whatever sort of links in with the actual physical resemblance of the cat.”

I was upset when I heard about the killing of Cecil, the famous African lion, but maybe something good could come out of it after all, for it sparked a global controversy and set off a backlash against the African hunting industry. Inspiring the creation of this incredible piece of art at the same time.

I think the gaunt frame, torn hide, and wide, harrowed eyes of the Clockwork Lion give a drastically different impression than the steady, powerful look of the famous Landseer Lions around him, dramatically illustrating the decline wild lions have experienced since the original statues were installed in 1867. The sculptor has made the lion seem very real, the agony on its face almost too painful to see. If I look at it for too long, it makes me cry.

I have tried to discover what has happened to the lion, as it was only in Trafalgar Square for the one day. It was auctioned off to raise money for the Big Cats Initiative  but I could find no coverage of that. It would be a shame if it vanishes into obscurity, as I think it is an emotional piece of art…

20 thoughts on “The Clockwork Lion”