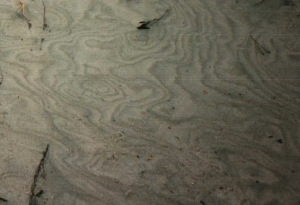 “Like the circles that you find, in the windmills of your mind”!

A very telling song when you put it with nautural phenonena. ‘Wheel within a wheel’. Just these two lines alone can give a kick start to writers who have ‘lost their muses’.

Just take one of the lyric lines, maybe turn it around, mix it up and voila, an idea may form. Has anyone tried this idea?. Not from just this one song, (which may not be your type of song), but any you can think of that tickles your fancy. There are enough in this world to choose from, are there not?

The picture above was taken on the beach of a Canadian lake. Not one of the great big ones, but something a tad smaller (though it looked quite large to me at the time I was there). This was a small…